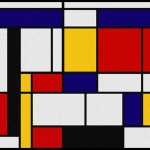 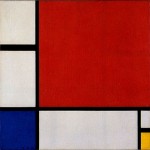 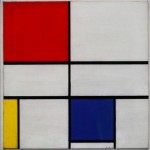 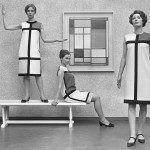 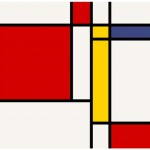 Piet Mondrian was one of the greatest painters and the leading abstract artist of the 20th century. His abstract art consisted of white ground, upon which he painted a grid of vertical and horizontal black lines and the three primary colors. De Stijl, Dutch for “The Style” was a Dutch artistic movement founded in 1917 in Amsterdam. He is still “Pulsating Intricacy” as can be felt in this 2015 NY times article.

Can you solve the Mondrian Art Riddle?
Now Code your Style with The Artist or whatever language inspires you!

OBJECTIVE: Introduce important ideas in art that use simple geometric forms. Our art project will be to create your own version of the 1921 Composition II in Red, Blue, and Yellow art masterpiece.

Consider how you want your eye to follow the colors and how you might create a balance in their placement. Keep in mind you may wish to create an asymmetrical composition.” To reinforce comprehension of fractions, have the students cut dimensional rectangles and squares, that is squares that are one-half the size of the first one they cut, or rectangles twice the size of the first one cut.

VOCABULARY
• Composition: The way the parts of the artwork are arranged by the artist.
• Abstract Art: Art that is either a stylized impression of what the artist saw or non-representational art that is completely detached from the things that we see including only lines, shapes, colors, and textures.
• Primary Colors: A fundamental color from which all other colors can be made by mixing.
• Geometric: Using shapes with straight lines, circles, squares or parts formed thereof
• Asymmetric: Not the same on both sides; not a mirror image
• Cubism: An art style which fragments forms and space

ABOUT Piet Mondrian:
Piet Mondrian was a Dutch painter who created a geometrical abstract style known as neoplasticism. It had widespread influence on modern painting, architecture and design. He was born in 1872 and went to art school in Amsterdam where he began painting meadows, farms, cows and windmills. He studied and tried different art styles before his experiments in cubism. These experiments led him to develop its ideas even further, and he gradually eliminated all figures and subjects from his paintings.

He met other Dutch painters Bart van der Leck and Theo van Doesburg and with them founded an influential new movement called De Stijl or The Style. His work after this time evolved to compositions divided into rectangles of different sizes, each painted a uniform color. He moved to the use of the three primary colors because with white and black he felt they represented the strongest, purest contrasts. In most of his compositions, he divided his pictures asymmetrically with a grid of black vertical and horizontal lines, painting in some of the resulting rectangles with yellow, blue, red or black. White became an important grounding element in his paintings. He broke ties with DeStijl in 1925 when his friend Van Doesburg started to use diagonal lines.

APPLICATION THINKING
Mondrian worked realistically early in his career, then experimented with various styles. He liked the fact that cubism allowed him to change shapes and space, and he eventually settled on the style we saw in the art example.